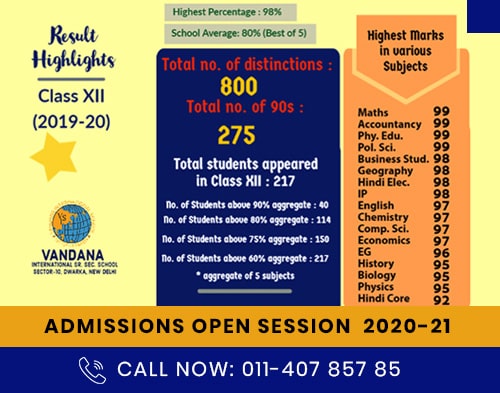 Vandana International Sr. Sec School organized a farewell party for grade 12th students to let students embrace these last days of their school life and to have these memories locked in their minds and hearts. Joygaon was the venue for the event. The morning of 9th December was a fiesta devoted to the years spent together with friends and teachers and to reminisce joyous moments. The event started with welcoming the guest of honor Miss Akansha Tondon and all the students of 12th in “Hasta La Vista”, farewell of 2K19.
All the students were in absolutely elegant and beguiling attires. The event was then followed by 3 rounds for amusement of all the 12thies. All the participants walked on the ramp in the first round. Then, the selected ones went up for further 2 rounds which were of props and question/answers. They boldly and confidently performed in all those rounds and we all enjoyed it a lot. They danced, acted and shared their thoughts with us. It was one of those moments we live for and desire to cherish.
The programme was then followed by title distribution. Ishika Tyagi of XII C could win the crown of Ms.VIS and Harsh Bisla of Class Xll A was selected as Mr. VIS. Many more titles were given to the participants. After the title distribution was over, all the 12thies danced their energies out. The feeling of joy and enthusiasm filled the atmosphere.
At the end, their eyes were wet. They knew it was time to say goodbye, as the name of our event says. The event ended with students remembering their past years spent in school and leaving their eyes all watery.

Students of Vandana international school have celebrated world environment day on 5th June 2020 .
Students enthusiastically participated. Activities performed by students were - reciting poem , showing ppts and also delivering speech . These activitly not only help students to get engaged in these activities but also inculcated sensitivity towards our nature.

Vandana Internationl School celebrated October 31, the Birth Anniversary of Sardar Vallabhbhai Patel as Rashtriya Ekta Diwas (National Unity Day), Virtually as a mark of tribute to the efforts of the first Home Minister of India.
.The day was celebrated in a befitting manner and the message of unity, integrity and security of the country was conveyed by the students.
Students participated in the programme whole heartedly. To mark the occasion speech and skit , on Sardar Vallabh Bhai Patel and his contribution to the country was given.A  poem and a song on "Ekta" were performed by the students.
Run for Unity was also conducted virtually by students to reaffirm the inherent strength and to withstand the actual and potential threats to the unity, integrity and security of the country.
National Unity Day pledge was administered.
The students and the staff pledged to uphold unity and security of the nation.
Also a remarkable poem was dedicated remembering Indira Gandhi,the first female prime minister of India, on her death anniversary.
Addressing the students and the parents, academic director, Ms Akansha Tandon said ,”The map of modern India as we see today wouldn’t have been possible without the pro-activeness, diplomacy and hard work of Sardar Patel."
Vice Principal ,Ms Purnima Thakur, congratulated the students and the staff of the school for making the programme a great success.

Keeping the festive spirit of Dusshera alive, students of Vandana International School of Pre- Primary and Primary Grades presented Ramlila, a gala theatrical enactment of Rama's life .The  Academic Director, Ms. Akansha Tandon also shared her profound knowledge with everyone.
A huge effigy of Ravana and  Corona Virus were burnt after the Ram lila, hoping that the existence of the deadly virus comes to an end soon. The students raised the slogans of‘Jai Shree Ram’ and every one enjoyed the serene atmosphere.Besides mythological glimpses, our students passed the social message in society to follow the path of Dharma, Truth and Righteousness.The success of this event could not have taken place without the contribution of the parents.At the end , Vice Principal, Ms. Purnima Thakur gave vote of thanks to everyone.

"Teaching is an instinctual art, mindful of potential, craving of realizations, a pausing, seamless process".
Teachers’ Day celebrates the unique role that adults play in the lives of young minds and help shape the future of a country.The significance of this day is ever-evolving, including taking lessons from life and making your experiences the teachers you needed to shape you into who you become.
Like every year,this year also VANDANA INTERNATIONAL SR.SEC SCHOOL organised a Virtual Teachers' Day with the theme BOLLYWOOD DREAMS for the amazing staff members . The organization organised various fun games,talent hunt and other fun activities for their teachers.They also gave tags to all the teachers to appreciate their work and talent in this field.It was a full filled event where teachers showcase their talent with full zeal and zest.

“Keep your face always towards the sunshine, and shadows will fall behind you.”
World Mental Health Day is observed every year on 10th October,with overall objective of raising awareness of mental health issues around the world and mobilizing efforts in support of mental health.
Primary wing of Vandana International School also observed the World Mental Health Day on 10th October by taking initiative to raise awareness among students about mental health. The teachers narrated moral and motivational stories to the students using creative gestures, facial expressions and appropriate voice modulation  highlighting the different components of mental well-being. Few brain storming questions were asked in between to enable reflection by the students on different aspects of mental well-being in the stories. The main objective was to provide stress free environment and load off their stress. The session was indeed valuable ,distinct and thoroughly enjoyed by the students.

"Be a student of success, learn everything  you can from those who have been the most successful "
An assembly undoubtedly holds a vital position out of all the activities in a school. It's the first platform which is provided to young minds, boosting their confidence  towards public speaking and develops a spirit of team work. Keeping up with the same the students of classes VI - X of Vandana International School  conducted a special assembly on the occasion of World Students' Day on  virtual platform. The academic director Ms. Akansha Tandon addressed  the parents and students and motivated the students with her encouraging words of wisdom. The assembly  was followed by various presentations ,wherein the students had given a striking performances, like;speech poetry, documentary,short film and a song specially dedicated to Dr. APJ Abdul Kalam.The day was celebrated not only to motivate the students but also to remember the significant contribution of Dr. APJ Abdul Kalam towards the edification of society. The assembly was concluded with motivational thoughts of Vice Principal ,Ms Purnima Thakur , she also acknowledged the efforts of everyone ,with a vote of thanks, for making the assembly a success.

Global Handwashing Day observed every year on 15th October. To celebrate this special day little Vandanaites of class 2 hosted a special virtual assembly .The Academic Director Ms. Akansha Tandon encouraged the students to wash hands with soap regularly and emphasized on the importance of handwashing as a way to prevent diseases. Students spoke about the importance of hand washing with soap, with an objective to raise awareness  about the importance of handwashing with soap as an easy, effective and affordable way to prevent diseases and save lives.  They gave their message through slogans, thoughts, poem ,skit and a dance performance. At the end they took pledge and shared the benefits of hand washing for the health of an individual.The Vice Principal Ms. Purnima Thakur concluded the assembly by giving a message that handwashing is a good hygiene behaviour and is a key to keep ourselves healthy.

There ways of spreading light.
To be a  candle or the mirror that reflects it
and a Girl Child is always a candle in the society .
Assembly in a School always plays a vital role for the students through which they not only learn different values of life  but also  get a platform to perform be it speech, Dramatics or singing.
Senior wing of  Vandana international school celebrated International 'Girl Child' Day on 17 October 2020 in the special virtual assembly.
Students presented different programs to Express their concern towards the Girl Child through speech, dance and presentations. A social message was also conveyed and the boys of VIS took oath to protect, respect and help girl child. Vice Principal Mrs.Purnima Thakur conveyed vote of thanks .

An assembly in a school always plays a vital role for the students. Students of class3 of Vandana International School hosted a special virtual assembly on World Food Day to raise awareness about importance of food. The Academic Director Ms.Akansha Tandon addressed the students and Parents and gave some valuable tips to prevent wastage of food. Students with their parents enthusiastically took initiative and participated to promote awareness. The assembly was followed by slogan, poem, skit and some  valuable tips. The Vice Principal Ms. Purnima Thakur conveyed the Vote of Thanks and congratulated the students for their active participation and commendable presentation.